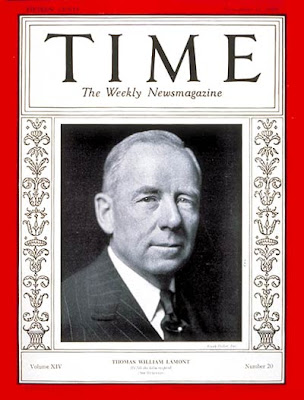 The Fruit Doesn't Fall Far From The Tree:

Photo: Flash Back To 1929 And Black Friday. Thomas W. Lamont Graces The Cover Of Time Magazine Just Before He Used His Position At J P Morgan To Try And Inject Confidence Back Into The Stock Market Through Massive Purchases Of Blue Chip Stocks.
Let's Not Get Fooled Again.....
Ned Lamont Is The Most Naive Gubernatorial Candidate

Ned Lamont recently said, “We haven’t earned the right to raise anybody’s taxes,”
Then Ned Lamont turns around and declares that this should not be considered a “read my lips” pledge against raising taxes.

That is, Ned Lamont will raise taxes
even if he doesn’t earn the right to.
Lamont declares that he wants to “show taxpayers that we’ll fundamentally reform government,” and he identifies three huge areas of state spending that are ripe for review — medical care, payroll, and retirement benefits.
But any fool can try to get more Medicaid money out of the federal government; promising to prune “top-heavy management” is just pandering to the state employee unions and won’t save much money because so few state employees are managers, nearly all being unionized,
Basically Lamont offers no ideas for curbing
state government’s pension obligations.
Often Ned Lamont notes, “fundamental reform” won’t pay off right away, won’t be arranged in the month the new governor has before his first budget is due to the General Assembly.
Ned Lamont can't deliver “fundamental reform”
because he has no clue what it is.
Mr. Lamont’s main idea for confronting the state budget gap of about $4 billion, a revenue shortage of as much as 20%, seems to be only to gather representatives of the most interested parties and have cordial negotiations.
Of course this is not only naive — Lamont’s most important endorsement comes from the state’s largest teachers union, the Connecticut Education Association, notorious for refusing contract concessions — but also a transparent dodge.
For among those interested in the budget are the people themselves, and they are supposed to be represented by the people they elect as governor and state legislators, who owe them a little more than vague assurance that everything will be negotiated later with someone else.

Indeed, Lamont’s whole campaign, in which he first faces the candidate endorsed by the Democratic state convention, former Stamford Mayor Dan Malloy, in the primary Aug. 10, increasingly looks like a dodge.

Clueless Lamont’s commercials emphasize Connecticut’s need for jobs, with which everyone might agree, but fail to identify any means to that end, even as job growth isn’t the most urgent task of state government — putting its own bankrupt house in order is.

Ned Lamont’s commercials also emphasize his opposition to “no-bid contracts,” about which there has been no controversy lately.
Asked in an interview the other day to explain what his commercials aim at here, Lamont could not identify any no-bid contracts.
Maybe the phrase just resonated with a few expensive campaign focus groups.

The emptiness of Lamont’s campaign may be demonstrated most by his refusal to debate Former Stamford Mayor Dan Malloy in the month before the primary, his refusal even to participate in the New London Day’s debate at the Garde Theater, traditionally a major campaign event.
Mr. Lamont explains his refusal as a matter of wanting to use the time to meet more people. But for meeting people and giving them a good look at a candidate, not much could surpass a debate in a big auditorium with an audience of more than a thousand and a television audience many times that along with news coverage generally.

The Desperate Ned Lamont apparently means to sit on his lead in Democratic primary polls and avoid getting shown up by a much more experienced and informed rival, confident that his nonsensical explanation about not debating will hurt him less than a competition broadcast statewide.
The Lamont"s Have Been Naively Screwing Up America For Years
Nativity In Politics Is Very Dangerous
Mr. Lamont, who is the great grandson of Thomas J, Lamont - a partner of the banking and finance firm J P Morgan And Company.

In 1920, Thomas Lamont undertook a semiofficial mission to Japan to protect American financial issues in Asia. He however did not aggressively challenge Japanese efforts to build a sphere of influence in Manchuria.

In 1926, Thomas Lamont, self-described as "something like a missionary" for Italian facism, secured a $100 million loan for Benito Mussolini..

Then There Was The Lamont's Biggest Failure

On Black Thurday in 1929, Thomas Lamont was the acting head of J.P. Morgan & Co. He tried to inject confidence back into the stock market through massive purchases of blue chip stocks.

The Lamont's prospered during the Great Depression while working and middle class Connecticut residents suffered greatly.

But There Are Even More Historical Naive Lamont Screw Ups

Thomas Lamont was an influential member of the Council on Foreign Relations, and one of the most important agents for the Morgan investments abroad. He was an unofficial mentor to the Herbert Hoover administrations, and informed both the Dawes Plan and the Young Plan.

The Dawes Plan (as proposed by the Dawes Committee, chaired by Charles G. Dawes) was an attempt following World War I to collect war reparations debt from Germany. When after five years the plan proved to be unsuccessful, the new and improved Young Plan was adopted in 1929 to replace it.

The Young Plan was a program for settlement of German reparations debts after World War I The Young Plan was presented by the committee headed by Owen D. Young. After the Dawes Plan was put into operation and it became apparent that Germany could not meet the huge annual payments, especially over an indefinite period of time.

The Young Plan was opposed by parts of the political spectrum in Germany. Conservative groups had been most outspoken in opposition to reparations and seized on opposition to the Young Plan as an issue. A coalition was formed of various conservative groups. One of the groups that joined this coalition was Adolf Hitler and the National Socialists German Workers Party (NAZI), a group which had previously been dismissed as an extremist fringe by the more mainstream conservative parties.

Thomas Lamont's naive Young Plan was was a major factor in bringing Hitler and the Nazis into power and bringing about World War II.

Ned Lamont made his political name four years ago by challenging U.S. Sen. Joseph I. Lieberman for renomination by Connecticut Democrats.
However, today all that has congealed into mere name recognition even as a new campaign demands a lot more than coasting on it as millions of dollars that are spent on Television ads trashing the Connecticut Democratic Party's Choice - Dan Malloy.
============================
Please send your comments, news tips and press releases to BridgeportRoundup@gmail.com
Posted by Anonymous at 6:55 PM

Subjects Of Interest To Bridgeport Roundup:

We are monitoring news feeds on the following persons, places, and issues ......